Back in 2014, some of my friends and I (all geocachers of course) started a event series that involved a little hiking with our caching. The second installment of this series is when I had what still ranks as my favorite all-time DNF. This is not often a celebration but this event was quite lively and now that I’ve finally thawed out, provides a few smiles. To set the scene, this event was scheduled for mid-November in the mountains of Northern Colorado.

When originally posted, the plan was to make the hike in the wilderness area and at one point reach a peak at about 9980 ft. We also had a specific cache in mind – GC5E6Q2 Near the Boundary — Comanche Peak Wilderness #2 by Denali41. Several locals expressed interest and a few even logged their Will Attends. Oh how things would soon change!

As the weather is apt to do in this part of the country, it started changing drastically as the event drew closer and closer. As the predicted temperatures dropped, so did the Will Attends. About a week out from the event we were looking at temps staring out the hike at about 2℉ with a slight chance of a little of the white stuff. By this point, we were down to about only three ignorant brave cachers willing to take the risk. We made the call and decided we were going to go for it no matter what. Well, the what happened.

Fast forward a few days to the event and we met at the rally point, pulled on all of our cold weather gear and emergency equipment (important later), and piled in to my Jeep to drive the final few miles down the two lane mountain guardrail-less road (important later) to the trail head. At the point we embarked, the temps had dropped below zero and the sky was looking fairly ominous. We knew at this point that we were definitely looking at snow but that, nor the sub-zero temps, weren’t going to stop us. Less than about a quarter mile from the Jeep, the first flakes fell. I might have regretfully uttered “wow that is pretty” at this point and would rue that statement within an hour. You guessed it. The bottom dropped out and the snow fell as if it were personally a muggle. I’m pretty sure I heard the clouds laughing at us. Maybe I was getting dehydrated but I’m pretty solid on this. It happened.

We started trudging up the mountain in good spirits winding our way around recently fallen trees. Since this was wilderness area, it meant our entire trek would be off trail which ultimately wouldn’t have mattered because the snow was accumulating quickly and the trail would have been obscured regardless. The snow slowed our progress some but truly added to the experience and made our hiking poles and shoe spikes absolutely necessary. It only took me three or four falls before I decided the equipment was necessary. I know. Sometimes I learn slowly. That’s not true. I’m just too stubborn for my own good. Don’t act like any of you can’t relate to that. How many times have you gone back to your own DNF nemesis caches?

Back to our adventure. We were now climbing over downed trees in about a foot of snow and grinning like idiots the whole way. We could have easily been miserable; however, it was just something about that day or the company but I couldn’t have been having more fun. We made it to the peak which was about 1600 feet above where we started and were exhausted. We stopped to retrieve our lunches from our frozen packs and enjoyed every frosty morsel as we laughed and told our own tall tales. We were only about 200 yards from the cache location so we took a few minutes to let our legs rest and gather our breath. Turns out we would need it because we spent the next hour scouring all around GZ looking for the cache. I remember naively thinking “we are going after an ammo can, how hard could that be?” Oh silly Memfis. 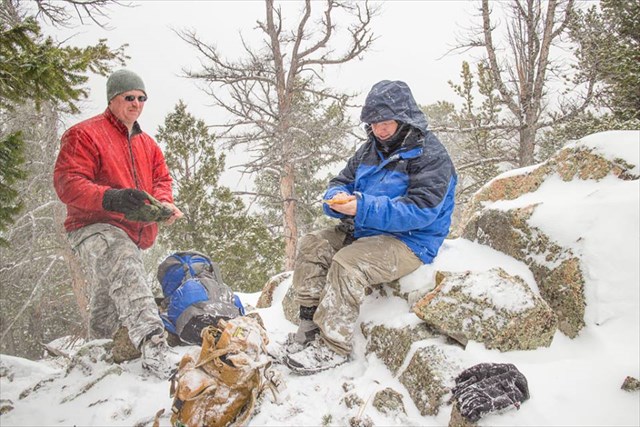 It turns out that if you bury an ammo can under a rock way back in a wilderness area at the top of a mountain and then use a foot of snow as camoflauge you can make it truly difficult to find. More than difficult. The three of us looked for a solid hour and could not come up with the smiley. At this point the temperature was really dropping and the snowfall rate was not subsiding. As much as it hurt my soul, we had to make the call to give up and head back down the mountain. I thought that we were going to be forced to physically remove one in the group because he was none to keen on adding a frowny face to the day. He begrudgingly agreed to leave so we did the responsible thing and used our beacon to send our pre-made message to family to let them know we were on the way down. 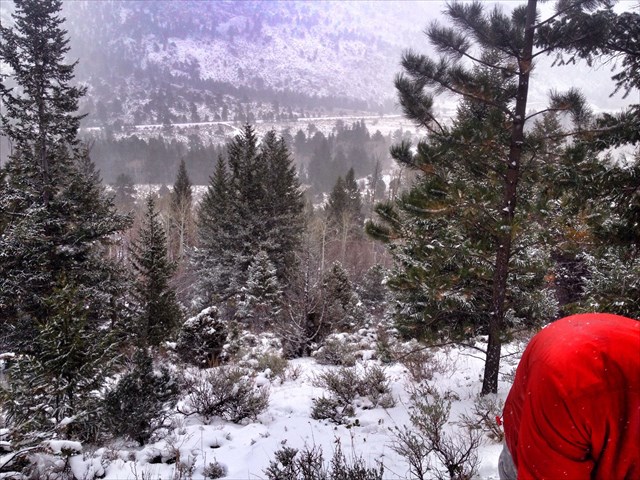 A couple of hours later and we were back at the trail head. Like the good husbands we are, we sent another message saying we made it to the bottom safe and sound. Unbeknownst to us, neither message made it to its intended target. Oops. We also didn’t know that the wives had gone from unhappy, to alarmed to full on call the sheriff about their missing husbands. Double oops. We made it back to the Jeep and felt the warmth of the heater wash over us thinking we had passed the most exciting part of our day. After our first full spin in the roadway we learned that the entire unlighted, no guardrail, narrow mountain road have completely frozen over during our hike. We were unable to go any faster than ten miles an hour while negotiating our desperate attempt to stay between the ditches. When I say ditches here, think a hundred foot drop-off into the pitch dark, meeting our guaranteed demise. It took almost an hour to make it out of the canyon but as soon as we did…

Our phones blew up. We each went breathless for a full minute as the multiple frantic text messages and missed calls rolled into all of our phones at the same time. When the slot machine onslaught stopped we each called our significant others bracing for the worst. You could read it on each of our faces as we kept the phones pressed against our ears and our wives went from relieved to, well let’s just say unhappy. The sheriff’s search party was cancelled and we were all grounded but I will say (now) it was worth it.

Come to think of it, I still haven’t returned to avenge that DNF. I guess I have another hike in my near future. 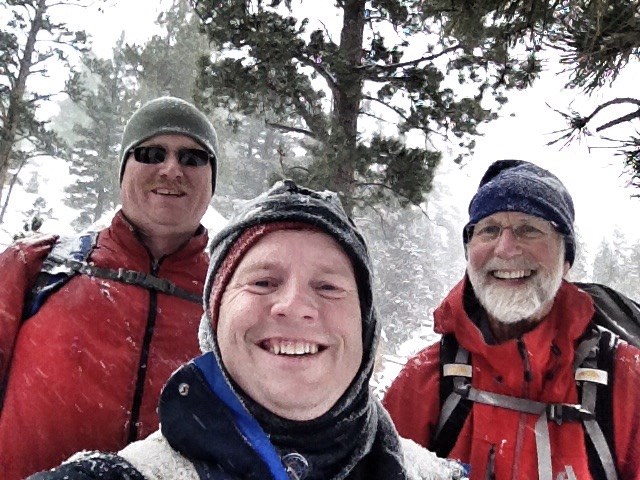 What is your most memorable DNF? Send in your story – “The Best Cache I Never Found” series can continue!

My real name is Jesse, but I seem to be known by more people as Memfis. I am the patriarch of Memfis Mafia, and some would say master mind (but not the boss) of the family.  I am way too wise to live in a house full of women and think I am in charge. I am always looking to push the envelope and never back down from a new experience.  I love geocaching and always try to elevate the game from a simple scavenger hunt to an unbelievable adventure with every find I make. The only thing I love more than adventure is geocaching with my awesome wife and two wonderful daughters. Find the Memfis Mafia’s adventures on Instagram (@memfismafia) and their blog (https://memfismafia.wordpress.com/).